The wholesale price-based inflation rose to 3.1 per cent in January from 2.59 per cent in the previous month, government data showed on Friday. The build-up inflation rate stood at 2.50 per cent so far this financial year, as against 2.49 per cent in the corresponding period a year ago, according to the Ministry of Commerce.


The wholesale inflation of food articles declined 1 per cent in January from December due to lower price of fruits and vegetables and tea, arhar dal, beef and buffalo meat, pork and gram.

The index for ‘Manufacture Of Leather And Related Products’ group declined by 0.5 per cent to 118.3 from 118.9 for the previous month due to lower price of chrome tanned leather, leather shoe and belt and other articles of leather (1 per cent each). However, the price of vegetable tanned leather (2 per cent), harness, saddles and other related items, travel goods, handbags, office bags, etc moved up by one per cent.

The monetary policy committee (MPC) of the Reserve Bank of India (RBI) on Thursday kept the repo rate unchanged at 5.15 per cent — a 10-year low in its last policy review of the financial year 2019-20 (FY20).


Consequently, the reverse repo rate stands unchanged at 4.90 per cent.


Further, the bank said it will maintain ‘accommodative’ policy stance as long as it takes.

The committee voted 6-0 in favour of the status quo of the interest rates.


In its last policy meet, the central bank had maintained the repo rate at 5.15 per cent points (bps). However, GDP growth forecast for FY20 was slashed to 5 per cent from 6.1 per cent.


Foreign brokerage firm Nomura expects GDP growth to slow further to 4.3 per cent in Q4 2019 from 4.5 per cent in Q3, and see a below-trend growth of 5.7 per cent in FY21 from 4.7 per cent in FY20. “We see the current inflation spike as transitory and expect a lack of fiscal activism to open up monetary policy space. We also expect the RBI to leave policy rates unchanged and retain its accommodative stance, but signal future easing; we expect a 25bp rate cut in Q2 2020,” it had said in its policy review note.


CARE Ratings had said that since the last monetary policy, contrary factors are in play. The economic growth has been estimated to be the lowest in the past 7 years while the retail inflation has surpassed RBI’s upper band of inflation targeting at 6 per cent. “We believe that policy rates should remain unchanged given the rising retail inflationary concerns mainly on account of food inflation. However, given the economic growth concerns the RBI is likely to retain the monetary policy stance at ‘accommodative’,” it had said.


Analysts at Brickwork Ratings had anticipated the slump in GDP growth has bottomed out to 5 per cent in 2019-20 and expected to rebound in 2020-21 to 5.5-6 per cent, aided by the government measures and the transmission of past rate cuts.

Retail inflation surged to an over five-year high in December on the back of rising food prices, breaching the Reserve Bank of India’s (RBI) upper tolerance limit of 6 per cent at the time of economic growth slowdown. Inflation based on the consumer price index (CPI) rose to 7.35 per cent in December, against 5.54 per cent in the previous month and 2.18 per cent in December 2018, data released by the Ministry of Statistics & Programme Implementation (MoSPI) showed on Monday. December inflation was the highest since July 2014, when it stood at 7.39 per cent. The CPI last breached RBI’s upper band of inflation target in July 2016.

Economists say now it is up to the Budget to address the issues in agriculture to bring down high food inflation which keeps recurring.


“Though we expect headline CPI inflation to correct sharply in January and further in February, from the unpalatably high 7.35 per cent recorded in December 2019, it is expected to remain sticky above 4.3 per cent in the next few quarters,” said Aditi Nayar, principal economist, ICRA.


The rate of price rise in vegetables surged to 60.5 per cent as against 36 per cent, mainly on account of triple-digit inflation in onion and garlic. Onion inflation doubled to 328 per cent in December from 128 per cent in the previous month.


Inflation in garlic inched up to 153 per cent from 144 per cent in November. Vegetable inflation in urban areas touched 75 per cent, while it was 53 per cent in the country-side. Price rise in pulses stood at 15.4 per cent. 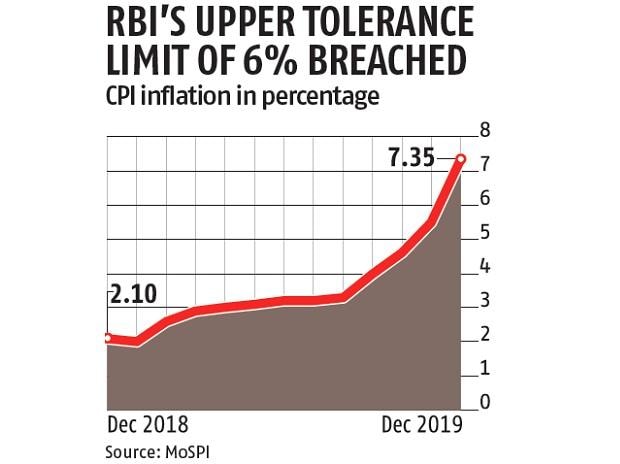 Core inflation picked up marginally to 3.7 per cent in December, up 0.2 per cent from November. Tariff hike in December also pushed up inflation in telecom to 10.01 per cent against 2.83 per cent in the previous month.


CRISIL chief economist D K Joshi said a closer look shows that the current spike in inflation comes from transitory or idiosyncratic factors which typically don’t last long. “RBI targets headline inflation so it needs to contain that even if the rise is on account of transitory factors,” he said.


If food inflation returns to its trend level of over 5 per cent, maintaining the 4 per cent headline target will be challenging once the economy and core inflation rebound, Joshi said. Inflation in health fell to 3.80 per cent in December from 5.49 per cent in the previous month and in education to 3.73 per cent from 5.21 per cent.


Inflation in fuel was a mere 0.7 per cent. Inflationary risks on global crude oil increased on account of tensions in West Asia. The RBI monetary policy committee (MPC) had kept interest rates unchanged in December citing “much higher than expected” inflation. It followed five cuts of 135 basis points earlier in the year. The MPC will decide on the policy rate on February 6, days after Budget 2020-21.


“The job of RBI has become more complicated due to growth slowdown, very little window to play around with the policy rate on the down side and retail inflation now higher than the targeted level. Under such circumstances, all eyes are now on the forthcoming Budget,” said Devendra Pant, chief economist, India Ratings.