The amount recovered by financial creditors has varied, and does not show a clear improvement. In fact, the recovery rate was just 12 per cent in the quarter ending December 2019, the lowest in at least two years (Chart 1).


Further, the IBBI data processed by EY India shows that bigger cases — with higher claims by financial creditors — take more time to get resolved (Chart 2). Also, the average recovery rate rises with time, but only till the upper limit of 330 days (Chart 3). After the 330-day period, there is no clear trend as to how fast or efficiently the cases get resolved, aside from this important fact: The most delayed cases are the ones with the higher claims.


Due to such cases, the average time taken for resolution, and even liquidation, is slowly rising (Chart 4). The data also shows that it is better to admit a company in the IBC process while its in operation, as the recovery rate is better (Chart 5A). A third of the companies not resulting in resolution were already defunct, shows Chart 5B.


In services, companies in the real estate and construction sector go for appeal or review the most (Chart 7).


A resolution is more likely in the power and hospitality sector companies.


StatsGuru is a weekly feature. Every Monday, Business Standard guides you through the numbers you need to know to make sense of the headlines; Source: IBBI, EY India, Compiled by BS Research Bureau 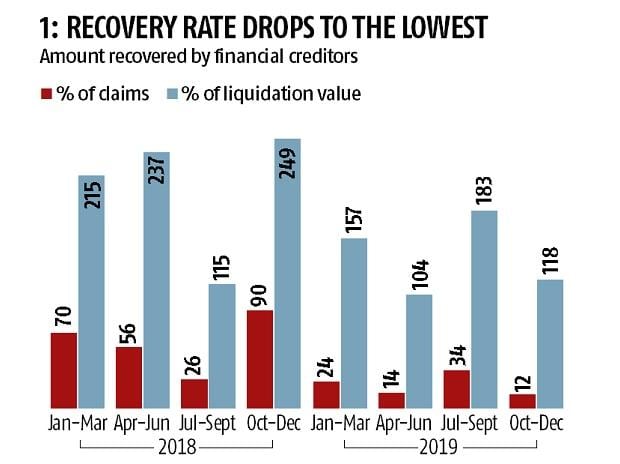 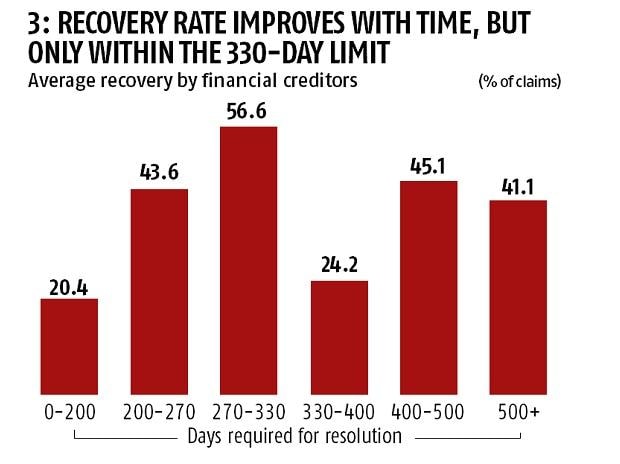 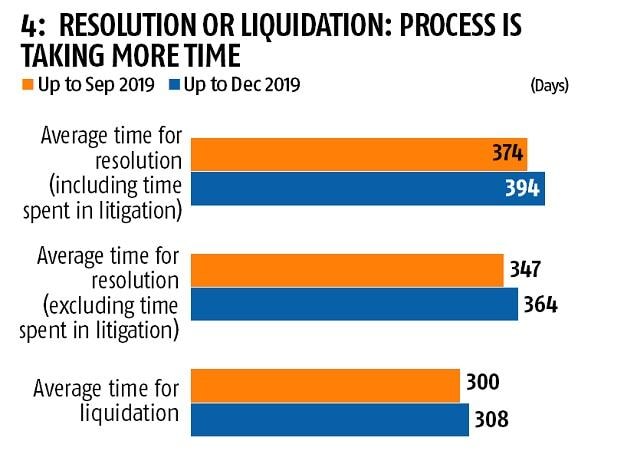 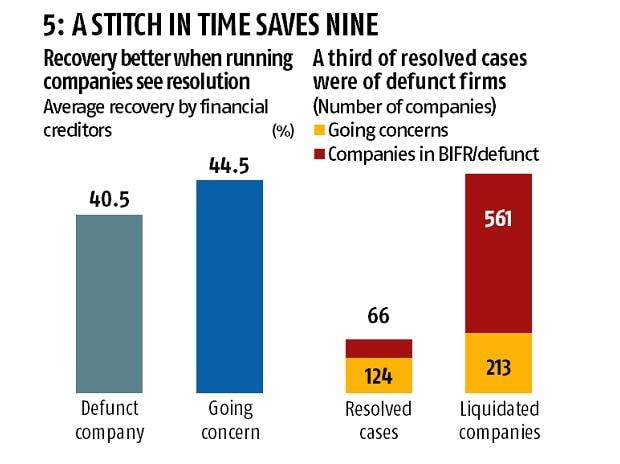 Facing difficulties in making recoveries from exporters, SBI Chairman Rajnish Kumar on Thursday called for changing the way export finances are done and suggested that enhancing the insurance coverage to 90 per cent can help reduce exporters’ cost and boost their business.

He also said the collateral gives some comfort to bankers while giving finance to exporters, but in terms of recoveries they are not very helpful.


“There are disputes and long time is taken to realise the collateral. I don’t think it gives you any kind of comfort, which can only come from timely repayment,” he said.


As a wayout, Kumar suggested that enhancing the insurance coverage from the Export Credit Guarantee Corporation of India (ECGC) to 90 per cent can help banks reduce collateral for exporters.


He said bankers have agreed that they will reduce the cost of lending for exporters if the ECGC will increase the cover to 90 per cent.


“If export finance has to be collateral-free then the ECGC coverage has to be enhanced which will help in both reducing the cost and requirement of collateral, he said.


Kumar also called for extending the interest subvention to all MSME units, irrespective of their target marketserving the domestic market or exports, but added that the discounted rates should be used only at the receivable discounting level.


Urging exporters to develop trust with bankers and the system in general he said, “I always have maintained that one Nirav Modi did not cause a loss of Rs 14,000 crore to one bank, as the damage he did to the system is much higher say Rs 1 lakh crore.

Chandigarh: A money exchanger in Amritsar was arrested for allegedly receiving Rs 75 lakh from one of the accused in a 194-kg heroin haul case, Punjab police said on Wednesday.

Harnit Singh alias Honey, who is running a currency exchange office at Landa Bazaar, has been arrested, said a police official of the anti-drug Special Task Force.

According to investigations conducted by the STF, Harnit was allegedly given Rs 75 lakh as drug money by an accused Ankush Kapoor who had been arrested in the 194-kg drug seizure case.

“After receiving money from Ankush, Harnit transferred Rs 75 lakh, which was part of drug money, to some people last month. We are trying to find out who Harnit gave this money to,” the police official, who is part of the investigation in the case, said.

“Investigations are underway,” the official said while adding that Harnit has been booked under relevant sections of the the Narcotic Drugs and Psychotropic Substances (NDPS) Act.

On January 31, the STF of Punjab police had seized 194 kg heroin and other contraband from a rented house in Akash avenue in Sultanwind village of Amritsar district after the arrest of six persons, including an Afghanistan national and a woman.

In addition to heroin, 38 kg dextromethorphan, 25 kg caffeine powder probably used to cut and mix the heroin and six drums of chemical composition weighing 207 kg were also recovered from an illicit laboratory inside the house.

Simranjit Sindh Sandhu, a proclaimed offender, and Ankush Kapoor, a cloth merchant, were the alleged kingpin of the drug racket busted by the STF.

Earlier this month, the STF had seized three kg heroin from the residence of Ankush.