The outbreak of the new virus threatens to erase $29 billion of this year’s revenue for global airlines, mostly for Chinese carriers, as travel crashes worldwide, according to the International Air Transport Association.


The trade group for global airlines said Thursday that the virus causing COVID-19 has the potential for causing a 13% decline in demand for Asian carriers this year.

The contraction comes at a time when Asian airlines’ sales had been growing, the group said.


Global air traffic will be reduced by 4.7% for the year, marking the first overall decline in such demand since the financial crisis of 2008 and 2009, IATA said in a statement. How profits will be affected was still unclear, it said.


The estimates foresee a scenario where COVID-19 has a “V-shaped impact,” similar to what happened during the SARS virus outbreak in 2003, with a sharp dive followed by a quick recovery, according to IATA.


The virus, which began in China late last year, has sickened more than 75,000 people in China, Some 2,000 people have died in China. More than 1,000 cases have been found outside mainland China.


International airlines including British Airways, Germany’s Lufthansa, Australia’s Qantas and the three largest U.S. airlines have suspended flights to China, in some cases until late April or May.


Travel restrictions inside China and fear of the illness have devastated demand for domestic flights in the fast-growing China market.


Many nations are warning people not to travel to China, or barring travelers from China, especially from the Wuhan area, at the center of the outbreak.


People around the world are also voluntarily scaling back travel, while some governments and health experts are encouraging people to stay indoors not only in China but also South Korea and Japan to avoid getting infected.


“These are challenging times for the global air transport industry. Stopping the spread of the virus is the top priority,” said Alexandre de Juniac, IATA’s Director General and CEO. “This will be a very tough year for airlines.” Analysts at Cowen, a US investment bank and financial services company, noted IATA might be underestimating the impact on Asia travel outside of China, noting the recent reports of dozens of cases in South Korea.


“While still relatively small, and too early to tell if it will spread further, we see this as a material negative data point on the global containment of the virus,” the Cowen report said.

Oyo Hotels & Homes on Monday reported over 4x increase in revenue for the financial year ended March 2019 to $951 million, while consolidated losses widened to $335 million because of expansion to overseas markets, said the home-grown hotel chain.


“The inherent costs of establishing new markets, including those related to talent, market-entry, operational expenses, among others, resulted in an increase in Oyo’s net-loss percentage in the near-term,” it said in a statement.

However, in a call with reporters on Monday, Rohit Kapoor, India and South Asia chief executive officer, said the firm is focused on executing a ‘clear path’ towards becoming profitable.


The SoftBank-backed firm has been reported to have been in the process of laying off close to 2,000 employees as it shifts focus towards profitability.


In the recent past, the Gurugram-based company has come under fire for its business practices and the way it has been expanding in markets such as the US and Japan.


“At about an employee base of 12,000, we have laid off between 15 per cent and 20 per cent of the employee base in an exercise that took place between January and February 2020,” said Kapoor, adding it was a ‘one-time exercise’.


The pressure on SoftBank portfolio companies to show profitability has increased after co-sharing workspace company WeWork made a failed attempt to go public last August, after its high valuation was questioned by the market, as well its optimistic expansion plans.


SoftBank’s Vision Fund has, so far, invested about $1.5 billion in Oyo, which is now believed to be valued at $10 billion. Among Oyo’s other investors are Airbnb, Inc., Sequoia Capital, and Lightspeed Venture Partners.


In FY19, Oyo also said business operations in India contributed to nearly $604 million of the overall revenue — a 2.9x annual growth. About $348 million was contributed by the company’s operations outside India, primarily China.


China is also Oyo’s largest market outside India, and the recent novel coronavirus outbreak is something the company is ‘tracking on a day-to-day basis,’ said Kapoor.


“Our key priority is that our employees and staff are safe… There will be impact in the short term, (but) it is too early to comment. Bookings have, of course, gone down,” he added.


Ghosh added that the China market remains a priority among international markets, even as Oyo has established a presence in the US, the UK, Latin America, and Southeast Asia.


In response to its business expansion in Japan, which was reported to have got off to a rough start, he said the geography had recorded elevenfold annualised growth in eight months, with an annualised revenue run rate of $95 million.

The Aam Aadmi Party won a landslide victory in the Assembly elections of Delhi last week. A look at the finances of the city-state gives a hint of how the party managed things smartly. The job of course was easier than that of other states as Delhi’s fiscal position has been strong.


The size of Delhi’s Budget is close to Rs 55,000 crore, or about 6 per cent of its gross state domestic product (GSDP). What set the state apart is that in the last decade, its fiscal deficit hardly crossed 1 per cent of GSDP, while many other states grappled to contain it within 3 per cent.

This was largely possible due to the revenue surplus position. However, the surplus has been shrinking of late (Chart 1).


Goods and services tax gives the most revenue to Delhi (Chart 2). The data shows that capital spending has been nearly stagnant for many years, and though the Budget projects to ramp it up this year, it is highly unlikely that it would happen (Chart 3). But to balance this, spending in key areas has more than doubled since AAP assumed power in 2015 (Chart 4A, 4B). Experts attribute the landslide victory of AAP to its spending on health and education, water and power. The boost in social spending after 2015 is noticeable.


Due to revenue sufficiency and little need to borrow for development spending, Delhi’s debt to GSDP ratio is very low (Chart 5). Compulsory spending on administration, salaries and interest payments is low in Delhi, when compared to the national average (Chart 6).


However, economic slowdown could spell trouble, as tax revenues are expected to rise slower than the economic growth, and could potentially derail the politically successful social spending model of Delhi (Chart 7).


StatsGuru is a weekly feature. Every Monday, Business Standard guides you through the numbers you need to know to make sense of the headlines. 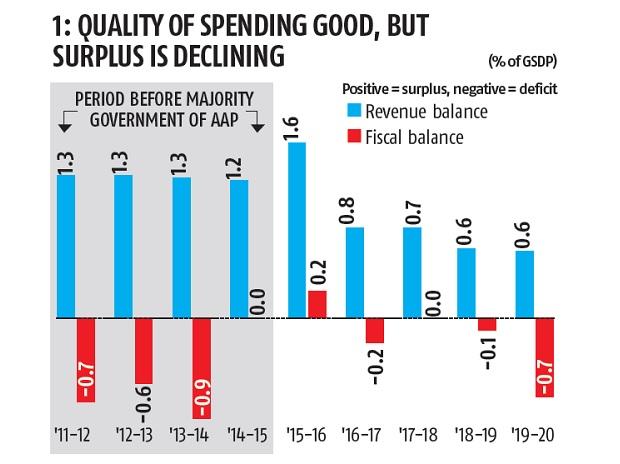 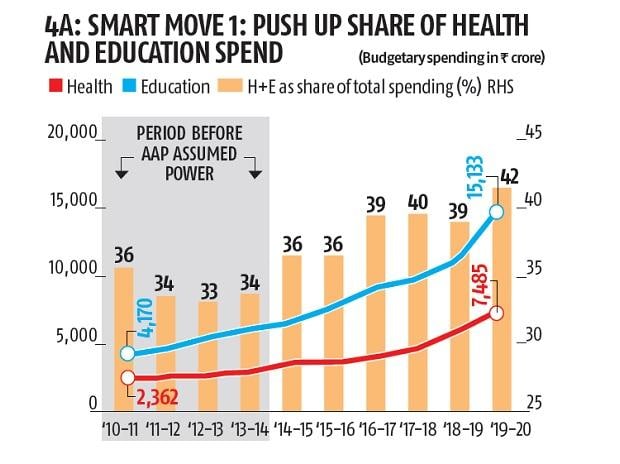 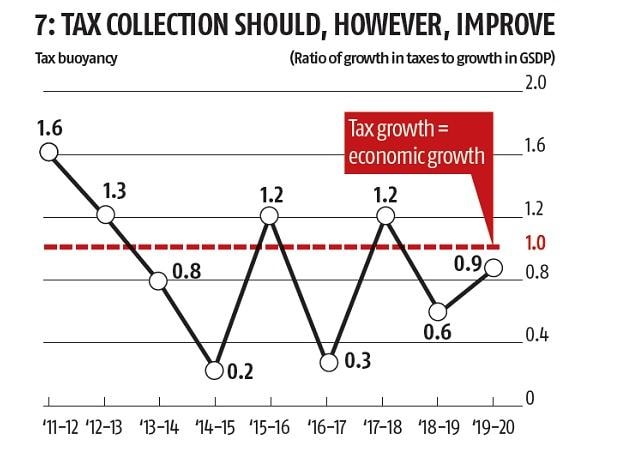