The World Health Organization cautioned years ago that a mysterious “disease X” could spark an international contagion. The new coronavirus, with its ability to quickly morph from mild to deadly, is emerging as a contender.


From recent reports about the stealthy ways the so-called Covid-19 virus spreads and maims, a picture is emerging of an enigmatic pathogen whose effects are mainly mild, but which occasionally — and unpredictably — turns deadly in the second week. In less than three months, it’s infected about 77,000 people, mostly in China, and killed more than 2,200.


“Whether it will be contained or not, this outbreak is rapidly becoming the first true pandemic challenge that fits the disease X category,” Marion Koopmans, head of viroscience at Erasmus University Medical Center in Rotterdam, and a member of the WHO’s emergency committee, wrote on Wednesday in the journal Cell.


The disease has now spread to more than two dozen countries and territories. Some of those infected caught the virus in their local community and have no known link to China, the US Center for Disease Control and Prevention said.


“We are not seeing community spread here in the United States yet, but it’s very possible — even likely — that it may eventually happen,” Nancy Messonnier, director of the CDC’s National Center for Immunization and Respiratory Diseases, told reporters on Friday.


Unlike SARS, its viral cousin, the Covid-19 virus replicates at high concentrations in the nose and throat akin to the common cold, and appears capable of spreading from those who show no, or mild, symptoms. That makes it impossible to control using the fever-checking measures that helped stop SARS 17 years ago. 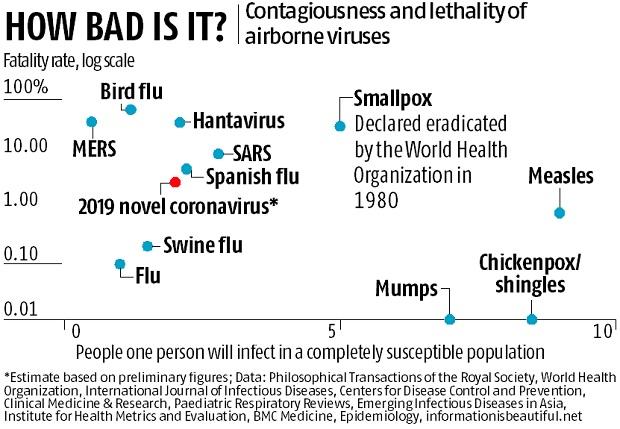 A cluster of cases within a family living in the Chinese city of Anyang is presumed to have begun when a 20-year-old woman carried the virus from Wuhan, the outbreak’s epicentre, on January 10 and spread it while experiencing no illness, researchers said Friday in the Journal of the American Medical Association.


Five relatives subsequently developed fever and respiratory symptoms. Covid-19 is less deadly than SARS, which had a case fatality rate of 9.5 per cent, but appears more contagious. Both viruses attack the respiratory and gastrointestinal tracts, via which they can potentially spread.


While more than 80 per cent of patients are reported to have a mild version of the disease and will recover, about one in seven develops pneumonia, difficulty breathing and other severe symptoms. About 5 per cent of patients have critical illness, including respiratory failure, septic shock and multi-organ failure. “Unlike SARS, Covid-19 infection has a broader spectrum of severity ranging from asymptomatic to mildly symptomatic to severe illness that requires mechanical ventilation,” doctors in Singapore said in a paper in the same medical journal Thursday.


“Clinical progression of the illness appears similar to SARS: patients developed pneumonia around the end of the first week to the beginning of the second week of illness.” Older adults, especially those with chronic conditions, such as hypertension and diabetes, have been found to have a higher risk of severe illness. Still, “the experience to date in Singapore is that patients without significant co-morbid conditions can also develop severe illness,” they said.

BRUSSELS: The European Union (EU) held an emergency meeting to discuss how to cope with the coronavirus epidemic and prevent an outbreak and spread in Europe.

In the meeting on Thursday, European Commissioner for Health and Food Safety Stella Kyriakides warned ministers at the event in Brussels that “viruses know no borders”, reports Efe news.

“This outbreak highlights the urgent need for close cooperation and coordination across Europe and beyond,” she added.

She said coordination within the EU was vital in fighting the virus, including sharing information and cooperation between countries.

“We are determined to ensure an effective, coherent EU-level response,” she said, adding: “We need to be united in our response – coherent and coordinated with each other.”

Kyriakides said there needs to be uniform border controls at airports for flights coming from China, where 99 per cent of cases have been reported.

There have been 50 confirmed coronavirus cases in 11 European countries, with Germany, France and the UK particularly affected.

Brussels has ruled out imposing borders within the Schengen area, with Kyriakides saying: “Freedom of movement in the EU needs to be safeguarded.”

EU representatives have been working to “establish an expert information exchange protocol” and held its first video conference with Chinese experts on Wednesday, she added.

Health ministers from the EU’s 27 member countries shared updates on the situation in their respective nations and the steps being taken to combat the outbreak.

As of Friday, the overall death toll in China due to the deadly coronavirus increased to 1,380, with 63,851 confirmed cases, authorities said.

Outside China, there has been three deaths – Hong Kong, the Philippines and Japan, with 447 cases in 24 countries, according to Mike Ryan, head of WHO’s health emergencies programme.


In its daily update, Hubei’s health commission also confirmed another 1,638 new cases in the central province, where the outbreak emerged in December. There are now more than 44,200 confirmed cases across China, based on previously released figures from the government.

The new virus is believed to have emerged last year in a market that sells wild animals in Hubei’s capital Wuhan, the city at the centre of the outbreak. The virus was officially named “COVID-19” at a conference in Geneva held by the World Health Organization, where the body’s chief said countries had a chance of stopping its global spread.


WHO head Tedros Adhanom Ghebreyesus said on Tuesday that although 99 percent of cases are in China, where it remains “very much an emergency,” it also “holds a very grave threat for the rest of the world.” He urged countries to share data in order to further research the disease.


Chinese authorities dismissed two senior health officials from Hubei on Tuesday, where tens of millions of people have been under lockdown since late last month, and tightened restrictions in its capital Wuhan.